Heaven is for Real 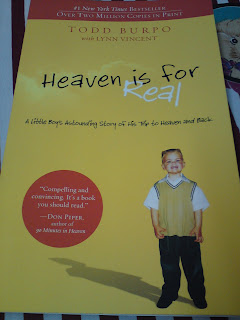 Have you ever wonder how does heaven look like? Perhaps this book can provide you with the visual images of heaven in the perspective of a pastor named Todd Burno. This book was written by him on behalf of his 4 years old son; Colton Burno who passed away in 3 minutes and his description on his trip back to heaven and back due to rupture in appendix.

I came across this book through my dad who have been searching for it in Popular last 2 week when he came back from the States. According to him, his pastor in San Francisco mentioned about the synopsis of this book and it amuses him on the way the little boy told the public on his travel to the world of our heavenly father. I finished the book in 2 days since it is quiet a light reading due to the story-telling kind of writing.

I heart the way the little boy described Jesus. He said "Jesus has a rainbow horse..." At the same time he puts his hand on his left shoulder, move it across his body down ;" his clothes were white, but it was purple from here to here and he had markers on his palms and both feet." He added "I was scared and Jesus hold me on his laps". Later on the little boy picturised vividly how he met his late grandpa and his unborn sister which his mom never mentioned her existence on top as well as other bible characters like John the baptist and Angel Gabriel. The story is accompanied by the verses in the bible too:)

This is a really nice book and I give 2 thumbs up for it :) I strongly recommend it to those who doubt on heaven and those who are curious about it
Posted by Sarah倩逸 at 7:30 PM

Sarah倩逸
Kuching, Sarawak, Malaysia
I'm just an ordinary girl. who just finished studying at UKM. A girl who enjoys cooking and baking. Daughter of God and an impulsive shopaholic who likes to shop for almost everything. I am also a future educator and I like to travel.